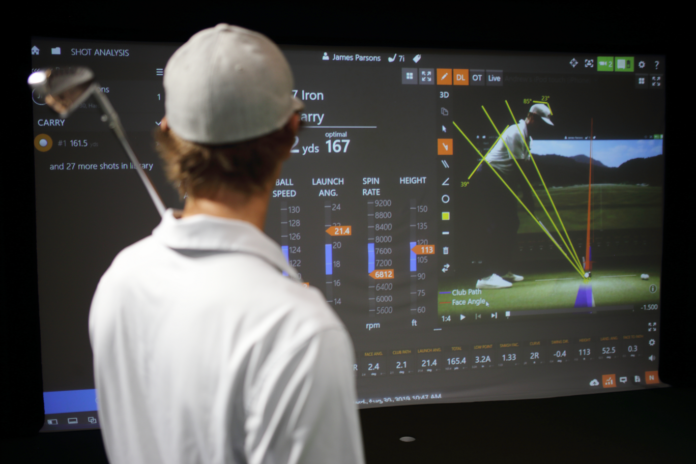 Head Coach Nick Trichilo has overseen much of Humber’s recent success. The 2017 OCAA Coach of the Year has been in charge of the school’s program since 2011, and prior to that was a Technical Coach in Humber’s golf swing lab. He also runs Pure Impact Golf academy with a mix of talented younger players and future college hopefuls as well as current Professionals. There are many factors that go into improving the golf games of his players, including fitness, nutrition and mental preparation. But one of Humber’s biggest competitive advantages, Trichilo said, is the school’s use of technology.

“Golf has changed significantly over the last several years,” he explained. “Technology is playing a big role in improving players’ games.”

Humber has made significant investments in its golf program, including the multi-million dollar Humber Golf Lab, which boasts the latest high-tech simulators and golf equipment-fitting tools to provide an experience-driven environment for its players.

For Trichilo and his Hawks golf team, as well as the younger players, one key piece of technology is TrackMan, a device that uses Doppler radar to measure the flight of a golf ball and the movement of a golf club. Approximately the size of a laptop, TrackMan is set up behind a golfer and also includes a video camera so golfers can review their swings. It’s often claimed as the standard for golf professionals and is used by more than 800 PGA Tour players as well as on national golf broadcasts.

Trichilo has been using TrackMan in Humber’s golf program since 2004. When he purchased his first unit, it was one of only two in Canada. Since that time, TrackMan has become extremely popular with golfers and is used regularly by PGA tour players. The technology is also making its way into professional baseball and NFL football.

“TrackMan is a huge help on the technical side of golf coaching,” Trichilo explained. “It lets you see the angle of attack – how the golf club is approaching the ball – club path and face angle, to the decimal point of a degree, which are all the key factors of ball flight laws. Then you can track how the approach angle is affecting the flight of the ball. That information allows us to develop more efficient swings in our players.”

TrackMan is able to follow a ball along its entire carry of the flight path up to 400 yards until the ball comes to rest. Once the device has finished tracking a shot, it can display shot data and graphics on a connected smartphone or computer.

The solution also has a simulator component, allowing golfers to play different virtual courses or specific holes, and hone their games before stepping foot on the actual courses. As well, TrackMan helps golfers account for different conditions, such as wind or higher elevations, calculating how much shorter or longer shots will carry and in which direction they will travel.

The post-shot reviewing options available on a smartphone are more limited than those on a computer. However, accessing the full TrackMan feature set on a computer is difficult because TrackMan generates so many data points, including the entire 3D trajectory of a golf ball’s flight path.

Trichilo was only able to access the full feature set when he was using TrackMan indoors at the Humber Golf Lab, where he could connect the device to a high-end desktop computer. Outdoors at a golf range, he was only able to access a more limited data set and would have to wait until he got back to the lab to download the saved TrackMan files from the cloud and access them on his desktop machine.(

CDW Canada learned that Trichilo wasn’t able to access TrackMan’s full feature set on the golf range and wanted to help Canada’s premiere collegiate and junior golf programs. The IT solutions provider proposed a laptop solution that would give Trichilo a full-featured TrackMan playback experience from any location.

However, Trichilo said that TrackMan does not support laptop playback. It had been felt in the past that a mobile computing solution just couldn’t cope with the high compute demands of Dual Radar and the multiple data points being created in split seconds. But by teaming with partners Intel and HP, and taking advantage of the huge leaps in technology Intel has been creating with partners like them, CDW Canada believed it could source a laptop that met Trichilo’s needs.

“The technology we’re able to pack into laptops today is much more powerful than it was even a couple of years ago,” said Daniel Reio, Director, Product and Partner Management and Marketing, CDW Canada. “We were confident our solutions experts, working with HP and Intel, could specify a machine that could handle the demanding compute requirements presented by TrackMan and help the top collegiate golf program in Canada become even better.”

Trichilo said the laptop has paid immediate dividends for the Hawks team, as well as his younger players.

When the Hawks travel to tournaments, the team is able to use the laptop to get the full TrackMan experience on the road. For instance, at a tournament in Medicine Hat, Alberta, which had a much higher elevation than the courses the Hawks typically play, Trichilo was able to bring the TrackMan and laptop to the range to see exactly how much further the golf balls were travelling. This helped his team re-calculate the distances they could expect their shots to fly for each of their clubs and wedges.

“Being able to get the full experience everywhere we go really helps,” Trichilo said. “At tournaments we can use it to refine the team’s swings, check distances on their wedges or simulate different holes. It lets us do a lot more things than we were able to do before.”

Teaching the next generation of Canadian golfers

It’s apparent that this technology is enabling golf on the go way more than was previously possible and that top-level college players, many of whom aspire to be professional and tour players, can benefit. But Trichilo points out that the recent rise in Canadian golf success also needs to be fed at the junior levels, with some players in his programs who are as young as 10 years old. By affording them the same access to technology, they can hone parts of their game at a much younger age – and of course these days the younger kids are way more in tune with the use of technology in every aspect of their lives.

As long as they are enjoying the game, this is a fantastic way to enhance their experience of it in a challenging but still fun environment – as well as being able to play indoors through the winter at a driving range.

And watching them, who knows – maybe one of Canada’s future major winners is somewhere using this right now!