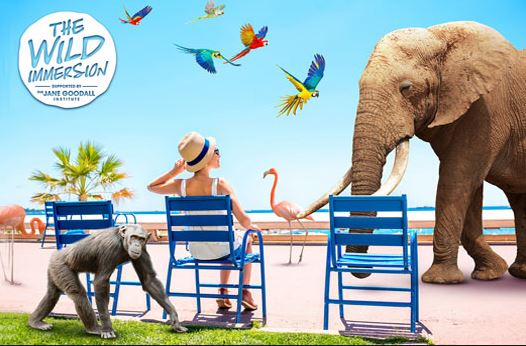 Did you know that:
● Earth’s population of wild animals declined 58 percent in 40 years, an average decline of 2
percent a year. 1
● Protected areas cover only 15 percent of the Earth’s land surface. 2
● The number one cause of the decline is habitat loss and degradation. 1
Do you feel surprised? Concerned? Indifferent? Whatever the case, reading about a few statistics is
worlds apart from actually witnessing the widespread loss and destruction of habitat first hand. But not all
of us can go to the disappearing rainforests of the Amazon or the melting ice caps of to see
this for ourselves. That’s why Lenovo TM is collaborating with The Wild Immersion, supported by The Jane
Goodall Institute, to make virtual reality (VR) a more immersive and memorable way to raise awareness
about our environment.

Last year, Lenovo partnered with Google® and WWF® to familiarize audiences with the world’s
disappearing rainforests at the ArtScience Museum TM in Singapore through augmented reality (AR) and
VR. This year, we’re collaborating with The Wild Immersion to deliver 360-degree VR experiences to
cities around the world, experienced exclusively through the Lenovo Mirage Solo standalone VR headset
with Daydream TM to raise awareness about the world’s habitat loss. And we’re kicking things off at the
Cannes Film Festival on May 8. Through VR, Lenovo, The Wild Immersion and renowned primatologist
Jane Goodall will place festivalgoers from 95 countries in the heart of wildlife, where viewers will
experience the thrill of flying alongside flamingos, running with bison and chasing Siberian tigers.

We know these issues can seem remote to our daily lives. They’re complex, abstract and frankly can be
depressing or overwhelming to read about. But we believe this important cause deserves a prominent
world stage like the Cannes Film Festival, and that VR is an immersive technology that can be used for
good — to promote environmental and habitat conservation. With the Lenovo Mirage Solo VR headset
and The Wild Immersion’s content, more people can now be transported to Earth’s most jaw-dropping
natural landscapes of Amazon, Africa and Oceania and experience humanity’s collective loss — in
immersive VR.

The VR video demos are held at the Majestic Beach at the Cannes Film Festival on May 8-19, where
attendees are invited to live the experience and share their feedback on social media with the world. The
VR experience will travel to Paris, France Shenzhen, China later this summer. The Wild Immersion
content is also available to students as part of the Lenovo VR Classroom offering, bringing lessons to life
through immersive learning. We hope you’re inspired to join the movement to protect our planet.
Discover more information on The Wild Immersion here.
Visit the Lenovo Blog for more information on the Lenovo Mirage Solo, the world’s first standalone
Daydream VR headset that combines the simplicity of an all-in-one headset with no phones, PCs or tethered wires needed. For more information on Lenovo VR Classroom, contact your CDW Account
Manager or visit cdw.ca/lenovo.

Why Endpoint Solutions Matter Now More Than Ever

How GPU Rendering is Changing VFX Practices in M&E