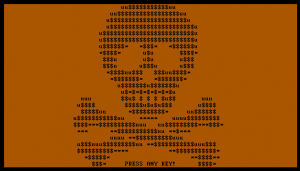 Since cybersecurity is one of the most talked about topics in IT – as I type this, news reports continue to roll in about yet the latest massive global security ransomware attack. This time, the payload appears to be a ransomware called Petya. SonicWall Capture Labs identified the original Petya variants in 2016. However, this time it appears to be delivered by Eternal Blue, one of the exploits that was leaked from the NSA back in April. This is the same exploit that was used in the WannaCry attack.

Infected systems will initially display a flashing skull, followed by a lock screen:

Once again, the cyber arms race continues to evolve. If I were to boil this down to its essence, what we are now seeing is that cyber criminals are combining exploits and attacks in creative ways that are not necessarily new, but still quite effective. Like mixing cocktails, the ingredients are all well known, but the exact mix can be completely new.

Today, June 27, SonicWall Capture Labs began tracking a high number of Petya ransomware attacks against SonicWall customers. Petya as a malware payload is not new. In fact, we reported in the 2017 Annual SonicWall Threat Report that it was second only to Locky in the number of infections we noted last year. The good news for SonicWall customers that are using our security services is that we have had signatures for certain variants of Petya since March 2016. Then, in April 2017 Capture Labs analyzed and released protection for the Eternal Blue exploit that Shadow Brokers leaked from the NSA. Also, on June 27, the Capture Labs Threat Research Team issued a new alert with multiple signatures protecting customers from the new Petya Ransomware Family.

Since SonicWall Email Security uses the same signatures and definitions as Gateway Security, we can block the emails that deliver the initial route to infection. To block malicious emails, ensure all Email Security services are up to date. Since 65% of all ransomware attacks happen through phishing emails, this also needs to be a major focus when giving security awareness training. Additionally, customers with SonicWall Content Filtering Service should activate it to block communication with malicious URLs and domains, which work similar to the way botnet filtering disrupts C&C communication.

Because more than 50% of malware is encrypted, as a best practice, always deploy SonicWall Deep Packet Inspection of all SSL/TLS (DPI SSL) traffic. This will enable your SonicWall security services to identify and block all known ransomware attacks. Enabling DPI SSL also allows the firewall to examine and send unknown files to the SonicWall Capture Advanced Threat Protection (ATP) service for multi-engine sandbox analysis. We recommend that you deploy Capture ATP in order to discover and stop unknown ransomware variants. Because of the rapid proliferation of malware variants, SonicWall leverages deep learning algorithms to provide automated protection against both known and zero-day threats. The combination of the SonicWall Capture Threat Network and SonicWall Capture ATP sandboxing provides the best defense against newly emerging hybrid attacks such as Petya. As always, we strongly recommend that you also apply the Windows patch provided by Microsoft to protect against the Shadow Brokers leaked exploits as well.  And it is always a good idea to maintain current backups of all critical data to allow recovery in the event of a ransomware event.