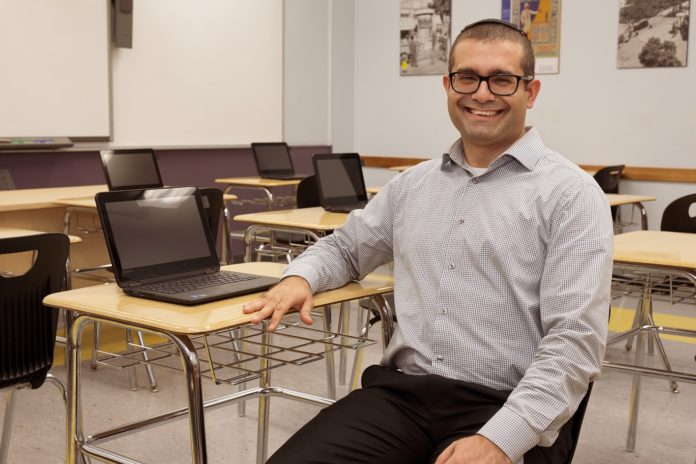 For a decade, CDW Canada has been helping Canadian educators employ technology to create more engaging learning environments through its Digitize Your Classroom Contest. The contest offers K-12 teachers and administrators across the country an opportunity to win $10,000 worth of technology, such as laptops, software, screens and projectors for their classrooms.

One of the winners of our Digitize Your Classroom was Bnei Akiva Schools of Toronto. The faith-based Jewish high school has approximately 270 students across its two Toronto campuses – one for boys and one for girls.

The school is dedicated to employing technology to deliver a robust program for its students, said Mordechai Sabeti, the school’s executive director, and will use the technology it received from the Digitize Your Classroom Contest, including a Lenovo N23 Chromebook; 18 Lenovo N24 (Touch & Pen) Windows 10 S 4GB/64GB Notebooks; a Lexmark MX310DN Multi-function printer; and an InFocus INF6500e 65-inch capacitive touch display, to boost its existing digital programs.

For the past four years, Bnei Akiva has had a one-to-one Bring Your Own Device (BYOD) policy for students, which requires each pupil to have a laptop to enhance their learning experience. “We’re platform-agnostic, so they could bring a Mac, Windows machine or Chromebook,” Sabeti explained. “But the expectation is that every student has something in hand.”

Ensuring each student has their own device enables Bnei Akiva to employ blended learning that combines digital media with traditional face-to-face classroom instruction. For example, a math teacher could record a lesson with audio and video and make it available to students. Students could watch the lesson at home, then come to school the next day and apply what they learned from the video in the classroom.

Blended learning has boosted student engagement, Sabeti said, but it hasn’t been an entirely smooth journey. Until now the school has been unable to administer year-end exams on student devices because the software Bnei Akiva uses for the exams does not support Chromebooks. Thanks to Digitize Your Classroom, the school has loaded its new Lenovo notebooks with its testing software and plans to issue the machines to students with Chromebooks so the entire class can use laptops at exam time.

The school is also exploring ways to incorporate stylus capability into its lessons. Until now it hasn’t had machines that incorporate a stylus, Sabeti noted. The school is considering two possibilities.

On the instructional side they’re exploring the idea of screencasts where teachers could include recordings with handwritten notations and share those with students. “We’re particularly excited about this capability for the math and science programs,” Sabeti said. “For example, in a science class a teacher could use the stylus to annotate an interactive or animated diagram.”

The school is also looking at using the laptops as a classroom set to enhance student learning in math and science classes. “The stylus-enabled machines could allow them to better visualize some elements of the curriculum,” Sabeti explained. “For example, a math work sheet with a graph and questions related to it. If it’s on a stylus-enabled laptop, it could be a living worksheet with a graph the student draws, marks up or annotates, and then receives feedback directly on their device. It would be a completely new method of engagement for them.”

The school is also looking forward to employing its new touch display. The capacitive touch capability makes it an ideal tool for the front of the classroom, Sabeti said, where it can boost student interaction.

Bnei Akiva is always looking at new ways to grow and expand its blended learning program, which is why the school enjoys working with CDW Canada, Sabeti said. The school has turned to CDW for technology advice for years and has always received excellent service. “We’ve had the same account manager for years,” Sabeti noted. “It’s nice to have that kind of relationship. He’s always open to talking things through and helping us sift through all the noise that’s out in the market.”

AI and ML: What Are They, and Why Should You Know the Difference?

5 Innovative Uses for Drones Across Industries

Is Your Business at Risk of a Security Attack?