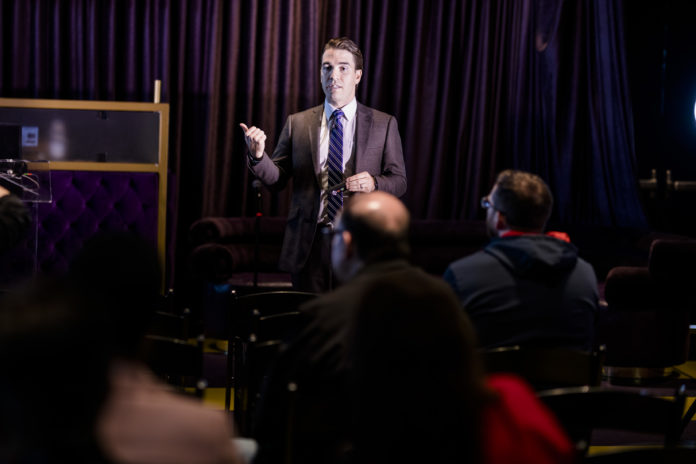 When fans of the National Football League’s San Francisco 49ers walk into Levi’s Stadium in Santa Clara, Calif., they can head to a kiosk to scan the tickets stored in an app on their smartphones, instead of standing in line with physical ticket holders. They can use the same app to guide them to their seats using wayfinding. Once they’re seated, they can order their food and have it delivered right to their location. And if they need a washroom, they can check their phone to find out which nearby restroom has the shortest line.

This picture of ultimate fan convenience was described by HPE Canada’s Channel Chief Zachary Dickson during a presentation at BTEX 2019. The proliferation of data and devices we’re seeing today provides opportunities for both consumers and businesses, he noted. In the San Francisco 49ers’ case, HPE’s Aruba wireless access points transform the fan experience. “It’s resulted in a huge increase in concession sales,” Dickson explained. “And it gives the 49ers organization a 360-degree view of their fans the second they walk into the stadium, which provides possibilities for targeted advertising and push notifications.”

The amount of data we generate as a society has grown exponentially in recent years, Dickson noted. For example, Walmart’s transactional database takes up more than 40 petabytes, Facebook users uploaded more than four petabytes each day in 2017 and by 2020, connected cars are predicted to produce around 40,000 petabytes a day.

That’s why HPE is investing heavily in technologies that help organizations make sense of the data they’re receiving and storing, Dickson said.

In addition to Aruba, which HPE purchased in 2015, the company has recently acquired SimpliVity and Nimble Storage. SimpliVity offers hyperconverged infrastructure, which allows organizations to reduce their data centre footprint and energy usage, simplify their management and accelerate their data backup and restore capabilities. “Hyperconverged is growing quickly because it solves customer challenges,” Dickson said, adding there are multiple use cases including branch office and virtual desktop infrastructure deployments.

HPE’s Nimble Storage offers predictive flash storage technology that leverages machine learning. At the core of the flash arrays is InfoSight, a machine learning engine that takes telemetric data from storage arrays around the world and uses that information to pre-empt potential problems. Dickson likened the technology to an enterprise IT version of Waze, the crowdsourced traffic application.

Please bookmark this page for more coverage of BTEX 2019.

Is Your IT Infrastructure Connected or Integrated?

Lenovo’s Latest Workstations Can Take on Your AI, VR and Analytics Workloads

IT Services Company Improves Processing and Performance with Converged Technologies